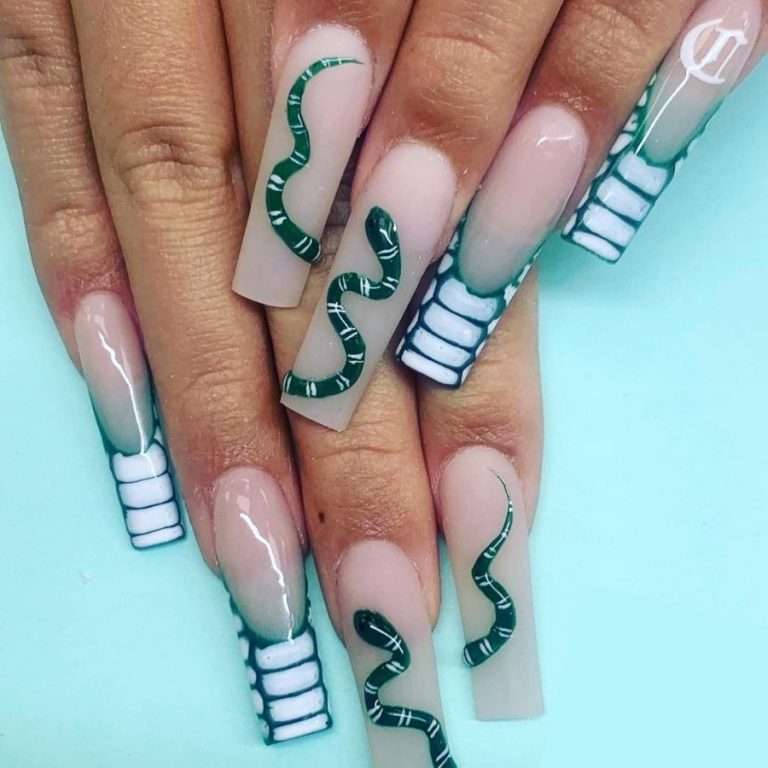 Have you ever wondered how to tell coffin vs ballerina nails apart?

I have been doing nails for years and love trying out different shapes on both clients and myself. I’m here to explain the difference between ballerina vs. coffin nails so you can decide which nail shape is best for you and your style.

Are coffin and ballerina nails the same?

No, coffin and ballerina nails are not the same. It’s easy to confuse the two nail shapes because they both have sharp corners at the tip and look like a variation of a basic rectangular nail.

Though the difference between the two styles is a matter of degrees, once you’ve worn both you’ll know they feel different and look distinct.

Though the two shapes are remarkably similar, there is one key difference between coffin and ballerina nails. Coffin nails have a straight-edged side, while the sides of ballerina nails are more rounded.

Coffin nails catch or snag more easily on fabric and skin than ballerina nails. For more on how to avoid that keep reading.

Other than that, the two are practically identical. Both are typically only done on longer acrylic nails, and each ends in a squared-off flat tip.

How to do ballerina nails

As the name suggests, this style is called ballerina nails as a tribute to the recognizable pointe shoes ballerinas wear. The shape is similar to the dance slippers in that they’re wider around your nail but get narrower as the nails get longer.

The tip almost resembles stiletto nails, which end in a point, except ballerina nails end with a blunt edge instead.

I love how easy the ballerina nail shape is. Here’s how I like to shape my ballerina manicure:

How to DIY coffin nails yourself

Like the ballerina shape, the coffin nail shape is also relatively easy. The easiest way to shape this style is with manicure scissors. With this tool on hand, I recommend following these steps to achieve the desired shape:

If you’d rather skip this process, and want to get a quick sense of what coffin nails will look like on your hands, try a set of cute press-on coffin nails for a test run.

Since coffin vs. ballerina nails are so similar, they look good with similar nail polish colors and designs. The two are usually done on longer acrylic nails, meaning these shapes can handle more intricate designs.

Some of the currently popular designs include:

Whether it’s a white French tip or a bright-colored set, it’s always a great time to get your nails done. There are so many different fun trends to try that you can’t go wrong with when it comes to nail art and color for long ballerina or coffin-style nails.

When not to wear ballerina nails and coffin nails

If I had the opportunity to ask Kylie Jenner, she’d probably tell me there’s never a bad time to wear coffin-shaped nails. If you look at her Instagram or watch her family’s reality show, you’ll see that she’s almost always wearing a set of long coffin-shaped nails.

One downside to coffin and ballerina nails is that they have relatively sharp corners, which can scratch. It might not be a good idea to wear this shape if you work with babies or young kids, or if you have to wear gloves regularly.

How to keep long nails from snagging on your cloths

Extra long nails can pose serious challenges to getting dressed, including poking holes in your clothing. So how can you enjoy long coffin nails and not ruin your cutest panties and leggings?

Here are a few hacks to help you stop shredding your favorite outfits:

What’s the difference between coffin vs ballerina nails?

Are coffin or ballerina nails better?

Ultimately, this comes down to your personal preference. After all, the two shapes are so similar that you have got to look closely to notice the difference. You might be the only person likely to know which style of nail shape you’re wearing. Shhhh! 😉

If you want a slightly softer look, I recommend the ballerina shape. I find the coffin shape works best when you want a more squared-off, uniformed-looking nail.

What is the most flattering nail shape?

I’ve always considered this kind of question a bit vague as it depends on your fingers and nail beds. For shorter fingers and long natural nails.

I think coffin and ballerina are some of the most flattering nail shapes around (along with almond nails and oval nails!). These shapes help elongate natural nails and make the fingers look longer and more elegant as well.

Beloved nail polish brand OPI recommends both the ballerina and coffin shapes for acrylic nail enthusiasts because they require salon maintenance and are harder to do at home.

What nail shape is the strongest and why?

This is a highly debated topic, but generally, people seem to agree that the round or “squoval” (square tip with rounded corners) are some of the more reliable styles for strength.

Celebrity manicurist Jin Sui Choi told Harper’s Bazaar that coffin and ballerina nails are “chic and strong.” So don’t rule this shape out completely, no matter the worries about breaking a nail.

These shapes are typically done on longer nails, which are more prone to breakage, but they should be fine as long as they are treated with care.

Ballerina and coffin nail shapes are borderline indistinguishable, but they’re two of the most fashionable shapes out there right now, and I love that they are such a statement manicure!

The main difference is that coffin nails have straight-edged sides while ballerina nails are more rounded.

If you’re going for a softer look, I suggest the ballerina shape. The coffin shape is edgier. The coffin and ballerina shapes are great for elongating short fingers and nail beds, and they’re popular with celebrities like Kylie Jenner. But they aren’t ideal for working with small kids or regular glove use.

If you love these styles, or just want more inspo, check out my article on 15 Different Types of Manicures!

Kim is an expert, with over 7 years in the nail art and makeup industry. She is an avid DIY nail artist and now contributing writer at BeautyStack.